Following on from last week’s A Level results, Hawthorn High School pupils are celebrating their achievements at GCSE today. Of particular note amongst a range of the highest achieving results were those of Heidi Nicholas who achieved 14 A*/A Grades, William Hughes achieved 11 A*/A Grades, Dylan Morgan was awarded 9 A*/A Grades, Josephine Lee, Harley Griffiths and Zahra Ali all achieved 7 A*/A Grades.  Angela Ong and Kaitlyn Bury achieved 6 A*/A Grades and AliceThomas was awarded 5 A*/A Grades along with Kealan Gray and Zoe Barnett. The school looks forward to welcoming back so many students to Sixth Form in September.

Performance at the highest grades was especially pleasing and, despite the very significant changes to the examination system in recent years, no pupil left without a qualification, 93% achieved at least 5A* – G grades and 61% at least 5 GCSE grades A*- C. The percentage of pupils achieving a C grade or better increased by 7% in both English and Mathematics and a similar improvement in the number of pupils who achieved at least 5 C grades or better including English and Maths should see the school ranked in the top 25% of similar schools across Wales this year.

Headteacher Mr Jason Hicks said “This is the second best set of results the school has ever achieved and we are immensely proud of the young people who have achieved them. To see our pupils achieve in this fashion under such intense pressure is delightful and their parents should be very proud of them.  This has been a real team effort between staff, parents, pupils and governors and I would like to thank them all for their hard work and support.  The school continues to move from strength to strength in its efforts to provide health, happiness and success for all the young people in its care.  We look forward to welcoming the majority of Year 11 back to our new Sixth Form partnership where facilities will be the best they have ever been in September.” 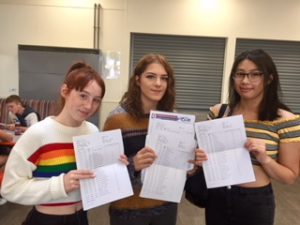 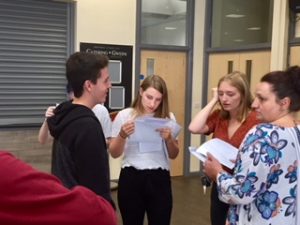 Day 3 of SHEP @ @HawthornHighSch we have break dancing sessions on site today, the pupils are thoroughly enjoying learning some new moves 🕺 huge thank you to @SportRCT again for their session! @ShelleyWyerRD